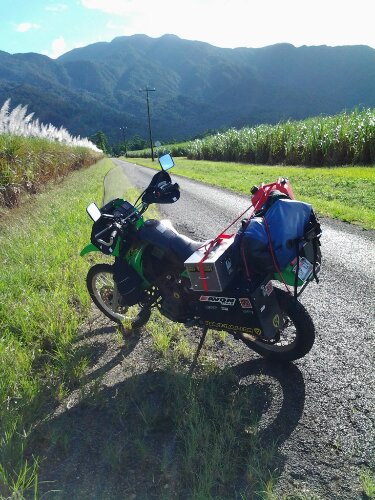 Eyelids heavy, I was inching toward another early night in Townsville, when a late check in arrived to my 4 person dorm at the Civic Guest House. Philip from the Czech Republic was a tall, friendly 24 year old who had traveled to the land down under to study English. Within 60 seconds of him setting his bag down on his bed, we arranged to head out on the town for beers. Dieter, one of our hosts at the hostel, suggested we hoof it down toward an area of the city where a handful of Irish pubs and night clubs furnish the nightlife of Townsville.

A 5 minute walk through the city’s sloping commercial core and we were at Flynn’s pub. A young local fellow poured his heart and soul into acoustic renditions of mediocre-to-terrible American pop songs and surfer rock on stage, while the overly made-up bartendress checked herself out in the mirror behind the taps. A round of Toohey’s New at $7 each went down well after a long afternoon on the bike, despite the outrageous price. Philip and I rapped about the surreal nature of traveling solo, favorite destinations, Korea and the philosophy of language.

A fellow in his late 30’s pulled up to our table–Aloicious from nowhere in particular but clearly of Aboriginal decent. He looked to be a local, but claimed to be in town looking for a flat. He tired quickly of our dialogue, and moved on to the table next to us where a young couple were more than happy to watch Aloicious attempt to C-walk across the dance floor by himself. 2 more rounds, and we headed back to the hostel, content in having fulfilled our social obligations in Townsville.

The next morning, I awoke at 7am, packed up the Green Hornet, bid Philip and Dieter adieu, and hit the road. On my way out of town I stopped by JR Motorsports to service the bike. To my surprise, motorcycle synthetic oil costs $65 USD for 4 litres. This being more than 2X what you would pay in the States, I was yet again taken aback by the horrendous cost of basic goods in Australia.

The bike serviced out easily in the span of 15 minutes, and I began loading gear back on for the trip to Cairns. Just as I was putting my helmet on, a well used Yamaha Tenere rolled up with the rider inquiring loudly “You that American traveling around, yea?”

Neville from Townsville was a kind, informative fellow who had spent plenty of time off the beaten path in Australia. He gave me the run down on countless places I hadn’t even heard of but was likely to visit incidentally, crocs, snakes, spiders–the man was a walking dictionary on the Bush. His unsolicited tutorial ended abruptly, I suspect when he realized he had other matters to attend to, and he jumped back on his bike–on with his day. Neville was, as far as I can tell, a perfect representation of Queenslanders: friendly, sociable, thoughtful, and most importantly, informed. Few places that I have traveled have had such a high level of informational accuracy from folks on the street level. When someone says it is 4 hours drive time including construction delays to Cairns, then it is most certainly 4 hours.

I pushed north through the agricultural hinterlands of greater Cairns before stopping at the base of 1622 meter tall Mount Bartle Frere for a photo op. The surrounding sugar cane tops and light near-coastal breeze created a peaceful setting. I sat next to an old barn for the better part of an hour, gathering my thoughts and putting the first week of the trip into perspective. I had covered most of Australia’s east coast by train, motorcycle and bus over the last 6 days, and met some fascinating people with valuable ideas about the world. My mind was, and remains, blown–and I am only just getting started.

I am now in Cairns for a few days taking care of some media obligations and getting ready for the Savannah Way–1,000+ miles through Australia’s remote northern coast and interior.

One thought on “East Coast: Check”