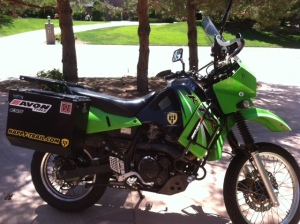 After four painstaking months dealing with one of the most incompetent freight forwarding companies on earth (they are based in Bangkok and it was by far the sketchiest transaction I have ever been a part of), the Green Hornet is finally back on American soil. I drove to Seattle on Monday to collect it, and put it back together Tuesday. After so many months in a dank storage container, I expected numerous mechanical items would need attention, however it turned right over and appears to be running well.

Leg three of Transworld Tour is in the works, however I tore my ACL and lateral Meniscus, and fractured my tibia 2 weeks ago and will have to see how quickly my knee heals. All things held constant the next segment of TWT will embark eastbound in July–retracing a portion of my father’s 1991 RTW attempt that took him as far as Red Square in Moscow, Russia. I plan to ride as far as New York this year, and finish the tour next summer with a burner ride from London to either Almaty Kazakhstan, Calcutta India, or Magadan Russia.

Thanks for following, and keep an eye out this summer for additional installments of the Motojournal in the Boise Weekly!

2 thoughts on “Back in the USA”